Sometimes I should listen to myself!If anybody else had suggested going outside at 7.30pm, 4 weeks off the shortest day I would have told them to take a torch.  Not me, though.  I have good night vision, unless I’m driving and facing other headlights, and I was sure I would be able to find myself to the pear tree in the food forest in the dark.  I started off ok, with the lights of the house behind me but as I got further in to the food forest, whack, I walked right into the Black Doris Plum tree.  I extricated myself and moved further to the left, figuring that if I walked alongside the blueberry netting I would be on the right path.  I could see a white outdoor chair under the apricot tree so I could avoid walking into that tree but I couldn’t remember exactly where the pear tree was.  Off the path the grass was knee high and wet.  I have an appalling sense of direction at the best of times, and it is not improved by being in the dark!  Being rural, we have no street lights, nor any close neighbours to add light to our place.  I walked smack into one of our washing machine pots – knee height – ouch, and then could figure that the trellis was now on my right.  Somewhere nearby was what I was looking for, though looking for was perhaps not the right expression.  Earlier in the day I had spotted an unpicked pear, the last of the season’s fruit.  This was my torchless mission.

It was a perfect, golden pear, untouched by birds and wasps, and as we don’t spray I had been very impressed with its quality.  I had to wave my arms around hoping that I would make contact with the tree, and then I saw it.  It literally shone in the dark.  It really was a golden orb, the only one left.   This year we had a good pear crop.  We preserved most of the pears in the old fashioned overflow way of our mothers.  We made chutney and are making wine but this one is for Bill’s breakfast.

1 thought on “I should have taken a torch!”

This site uses Akismet to reduce spam. Learn how your comment data is processed. 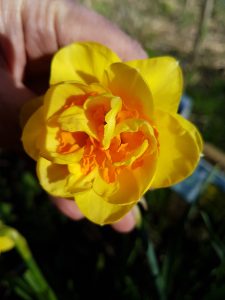 Whilst New Zealand is under a level 3 alert for Covid19, we are able to operate in a limited way.  We can sell flowers where delivery is contactless (and only locally to Martinborough).  Payment must also be contactless (we will invoice you for payment first).  Text 027 249 3369 to book a bunch or for more details.  Please do not call in to the farm without prior arrangement.

If you are placing a food order via The Grocer, you can also order flowers with your order, but contact Celia for that